What are MSME Enterprises?

As per Section 7 of MSMED Act, the image below (from msme.gov.in) shows the turnover threshold for micro, small and medium enterprises. 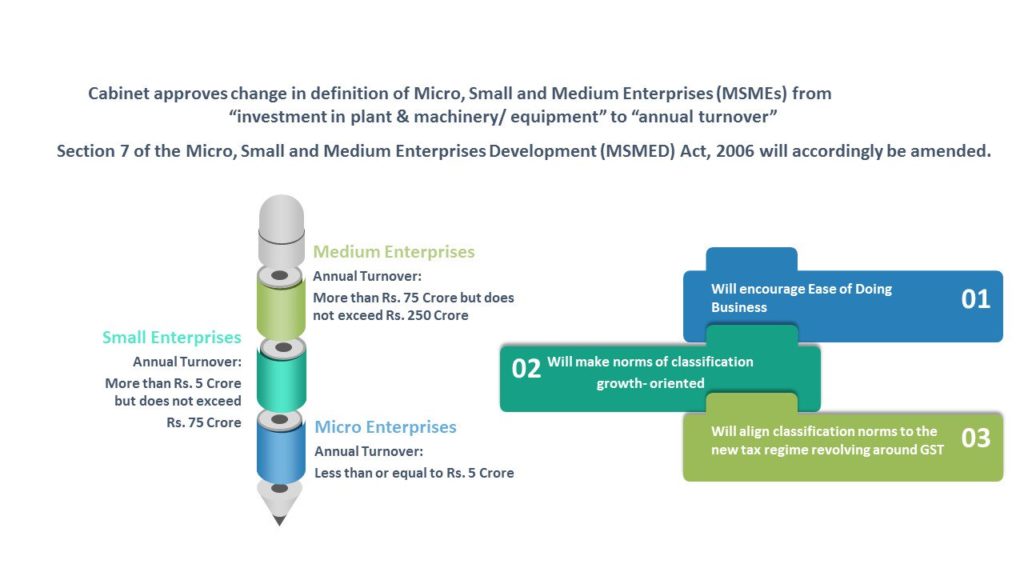 1) The Karnataka State government has started allocating a sum of Rs. 60,000 per unit and an extra 50% to homeless SC/ST craftsperson for construction of their living-cum-work sheds. Government also increased the subsidy percentage to 90% from earlier 60% and free supplies of tool kits. This scheme is with effect from 2009-2010. This programme started by the karnataka government to benefit the village tribals.

2) An online system is created for tracking of collaboration or vendor opportunities for MSME’s. To support this information, Department of Industries will conduct annual vendor development programs / events at state level and district level with the goal of bringing together all the MSME’s and Large manufacturers / Public sectors.

3) Allocating 20-30% of land in KAIDB (Karnataka Area Industrial Development Board) industrial areas to MSME’s. Within the Allotable land to MSME’s it is further divided into 20%, 30% and 50% to micro, small and medium enterprises respectively.

4) An increased price of 15% will be paid  for the goods manufactured by the MSME manufacturing industrial enterprises located in the state by the government departments and the state owned PSUs in case of purchases.

5) Attractive incentive package will be offered for the units in the backward areas to provide competitive spirit.

6) Market development and promotion will be backed by the government to the MSME’s by setting up physical and virtual exhibition centres at the state level and district level.

7) Reducing inspections (say income tax, quality check, sales tax etc.,) by  government for first 3 years from business establishment, so that the organisation sustain in the market and grow.

The Government of Karnataka under its Industrial policy 2009-2014, has grouped its districts into four zones for providing the package of incentives, concessions to the enterprises.

For detail study about the concessions and incentives offered by Karnataka State Government and Central Government, you can see MSME’s development in different zones ( Most backward areas, more backward areas, industrial developed areas).